If you read my blogs you would know I have an affinity to India that runs deep. After more than 90 days in India with literally just my backpack I fell in love with the place. My journey did not start off this way. Quite the opposite.

My blogs about India are missing my personal diary entries. I have left out the beginning, so here goes. I’ll start from the very beginning.

I had longed to see India for most of my life, it seemed world’s away from life in Australia or the USA (where I was living). I was attracted and drawn to everything Indian, the clothes, the jewellery, the art, the food, and of course the Bollywood movies that would play in the background of my favourite vegetarian restaurant.

After traveling to 50 countries, everything was starting to feel the same and look the same. Nothing was new. The chance to see the ‘real India’ was thrilling.

Obstacles Leading Up to India

The months leading up to embarking on a three month journey through India had worked against me. Every person I spoke with about my intention to relocate to India filled my head with stories of rape, unsanitary conditions and assured me that it was unsafe.

The visa I needed for India was also delayed and was proving to be near impossible. I needed an employment visa, even with sponsorship, acquiring the visa felt like I was running backwards.

As many people continued to convince me to reconsider, my desire grew stronger. I didn’t listen to what people said, I started to block them out. I was adamant, I was curious to finally see India, an exotic land with an incredible history. I had already began to research mythologies, languages and the places I would visit. I was going on this adventure at any cost!

No matter how experienced a traveler, It’s a huge deal to pack up and leave behind a comfortable, happy life to take on the challenge of an unfamiliar country.

Before getting this job in India I had started to plan this blog. I had purchased the URL years earlier and had been too busy actually traveling and working to start the blog. I had written a few drafts and decided I would finally start my blog upon returning from India when I had the time. 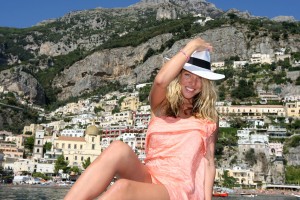 My Savior. I Was On My Way.

My savior leading up to the journey to India was another blog, ‘Hippie in Heels’. Reading ‘Hippie in Heels’, a female foreigner’s personal accounts of daily life living in India, became my morning ritual. Rachel’s quirky and honest accounts of life as a female in India were interesting, and really didn’t make India seem like the scary place others were insisting it was. This blog is incredible!

I was living in California prior to India and every morning while working out at the gym I would read Rachel’s blogs with a smile. While reading Rachel’s blog one morning I received an email alert, it was the Indian consulate in San Francisco. After many, many hours on the phone and not being told my visa was months away, I was finally receiving my visa for India! I was on my way!

I was on a what I call a ‘bus stop flight’ to begin my journey through India. I traveled from Sydney to Singapore, to Mumbai and then a connecting flight to Goa. In total, with a painful layover in Singapore a 36 hour journey. Even for an experienced traveler, it’s long and tiring.

I had arrived! I was finally in India. As I was waiting for my backpack on the luggage carousel I took in a huge deep breath and released a heavy sigh. I don’t know if it was relief to get off the plane or the fact that I had finally arrived in India.

Written By
Sommer Shiels
More from Sommer Shiels
I have been a Japan-o-phile for most of my life. I’m obsessed...
Read More