“What shocked you the most about traveling India?”

I was asked this question by a colleague while living in Europe. He was curious how I found living in India while filming Backpack India. My response was:

“India gets a bad wrap in the West. Lets have a coffee so I can tell you the whole story.”

Ok, there’s a few big things here and then some other small things that surprised me about India. The first thing was so shocking that I spent the first few days after learning this, planning how I was going to bring this concept to the world!

Westerners reading this, you are going to be shocked! Indian people share their water… with everyone. Let me explain.

I’ll give you a little hypothetical situation: You’re in India, walking around in Summer time, its hot, very very hot, you have no water, yet a family near you has a bottle, they will share that with you. Indian people share their water! This is second nature to Indians.

Other cultures do not do this, it’s unheard in any other country in fact!

Sharing water not common in the West

In stark contract to this new found concept of sharing one’s water, I returned to Los Angeles after 4 months in India and I went for brunch at a Hollywood cafe. This particular cafe were charging dining customers for tap water in a terrible drought. This is the worst kind of opportunism… charging people for a free resource !? Not offering even complimentary table water to dining patrons in a drought seems like an opportunistic backwards move for humanity.

I traveled through the whole of India, top to bottom, every single place I visited offered a jug of clean, filtered, complimentary water to drink…. third world country…. mmm I think not!

Indian people are more culturally sensitive and this concept of sharing water and this concept should be emulated by the rest of the world. A basic concept, yet somehow some places in the USA are going backwards.

On that note this whole bottled water thing has got out of hand. Bottled water is, for the most part worse than what comes out of the tap and it is tested a lot less! Don’t believe it? Read this link on just how much of a farce bottled water is and feel my frustration.

Teenagers and even young adults are so rude and have no respect. Yes this may be a generalization but in comparison, teenagers and young people in India are respectful of others and their parents. I can’t even begin to explain the differences.

The young people in India (or China) will take over the world- just being honest. Let me explain: Western teens are preoccupied with themselves and many have little respect for themselves or others. Indian teens are extremely respectful, studious and read…they read and study a lot! 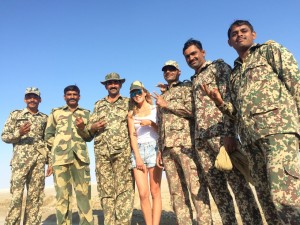 People in India have a strong sense of community values, everyone is treated like a family member within communities. Maybe some people will find this overwhelming.

In India it’s not uncommon to be invited to eat and share food with families you meet and you will be treated as if you were part of the family. The whole community is strong and works as one entity. How amazing is that! We in the West have lost this sense of community.

There are numerous studies to back up the health/psychological, not to mention life-lengthening. effects on people that have a strong sense of community.

One of the most memorable examples of this was when I was on a road trip through India and stopped off in the middle of the Thar Dessert- I stopped as I saw a make-shift set-up people were selling wares and I came to discover this was actually a camel auction.

The little children with smiley, sun-kissed faces and dusty clothes were so patriotic, and they were living with bare essentials. They told me how much they loved India! I also experienced patriotism throughout the whole of India, I visited a school of teens who were so excited to chat with me and tell me about how much they loved their country. Even adults were so positive about the future of their country and culture. This positivity and patriotism is not as common in other countries, people complain about anything and everything about their culture/country.

I have left the worst till last. Rubbish is everywhere in India.

There is a lot of hypocrisy that goes on in India. Some people don’t eat meat and claim to not hurt any living thing, yet the same people throw their used tea cup and cigarette butt right on the street. Worst kind of hypocrisy!

When you litter you not only kill animals and plants, you kill the earth! Google it.

For everything that is great about India, the fact that people carelessly litter constantly shows that there is some education in this area that is needed.

Even sacred places like the River Ganges is incredibly polluted and become a sewer due to the careless attitudes towards littering.

If you visit India take note of how respectful the young are and how strong the values of the people are and cherish your time there! I love India. I really hope that Indian people stop littering and there is more public education on the consequences of littering.

Have you visited India? What surprised you the most about India?